The Plan: Ride to Hermann from my house in Columbia, camp, ride 1 or 2 laps of the Tour of Hermann, camp, ride back home.

I awoke Friday morning pretty apprehensive about the forecast which called for a cold, rainy weekend. After Landrun, I’d had enough of being cold and wet on my bike. However, my bike was packed, I’d taken the day off work, and I couldn’t back out now.
I rolled out of Columbia at 9:30. As I headed East, Virtus teammate Chuck was headed West out of St. Charles, as he had agreed to be part of the madness.

Less than 4 miles from home I came across a Freedom Rooster watching me from a large tree. We made eye contact, he became my spirit animal, and I knew it was going to be alright. 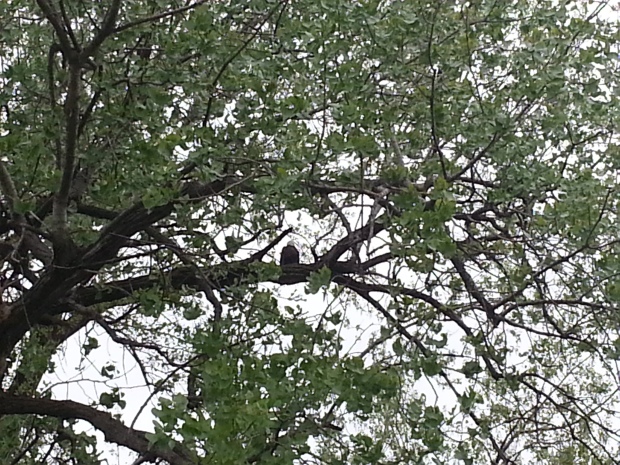 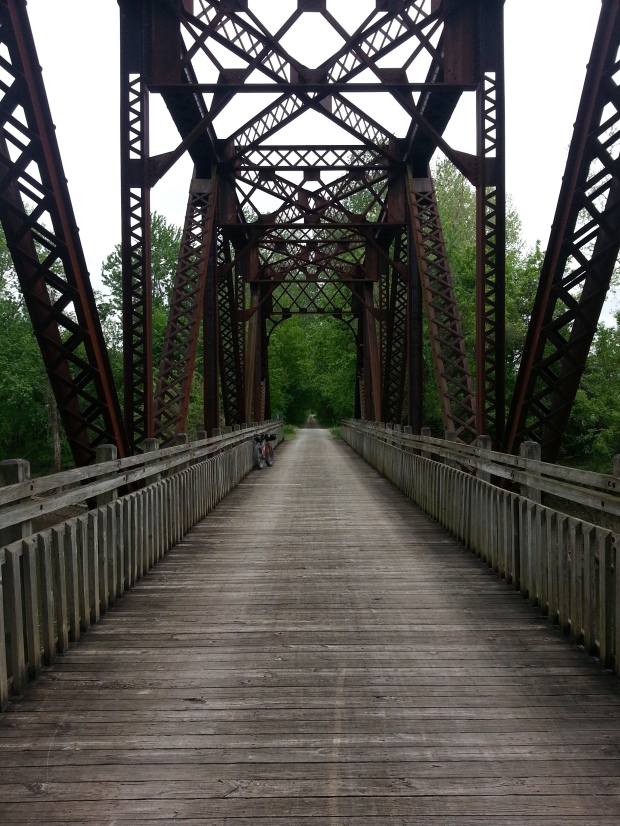 One of many cool bridges crossed

Luke had originally hoped to join me once I reached the Jefferson City trail head, but unfortunately that fell through. I stopped at the trail head and poured some whisky out of my flask in his honor, much to the bewilderment of a runner stretching nearby.

I had no real reason to stop in Tebbets, but the well weathered soda machine had a Gatorade with my name on it, so I obliged.

I’d planned on stopping for lunch at the Mokane Market. The owner has a bit of a reputation as a grumpy dude among riders familiar with the stop, but he was perfectly friendly and made me a great hard salami sandwich. He asked me what kind of bread I wanted it on, adding “all the cyclists want wheat bread”. I went with white to shake things up and give the small town something to talk about.

Shortly after leaving Mokane, the rain came and stayed with me until I rolled across the bridge into Hermann.

Chuck had arrived shortly before me and secured us a pavilion in the city park where we would be camping. It was super fancy with running water, electrical outlets, and a switch to turn the lights on and off.

After gabbing some food and drink at the Tin Mill Brewery, we came back and set up camp. Chuck had set his tent up under the pavilion to keep everything dry, however my tent is not freestanding and I pitched it in the grass. We had failed to procure any firewood, however the local gas station had plenty of Heet to burn in my stove, so we lit it up and drained some of the whisky provisions we had brought.

When the rain threatened again, I decided to relocate my tent and we used shoes, bags, and other items to secure my shelter under the pavilion. It worked perfectly and I slept pretty good until 2am when the winds came and blew the tent into the width of a cross country ski. I got up, put the tent back in the grass where it belonged, and slept perfectly for the rest of the night through the wind and rain. Lesson learned.

Day 2: Tour of Hermann – 30 miles
It was cold and rainy and I had decided I wasn’t riding in it.

We got up and made some coffee and oatmeal, both joking about not riding to feel the other out. The race started at 9 and by 8 it had stopped raining and warmed up enough to give a glimmer of hope. We decided we hadn’t ridden there to sit in our tents, made our way over to the registration tent and got ready to roll out.
The previous days miles had left their mark, so Chuck and I set a comfortable pace and just enjoyed the scenery. There are some beautiful views on those roads looking out over impossibly green valleys. The roads were in perfect shape, the creeks were flowing, the sun was out, it was perfect. 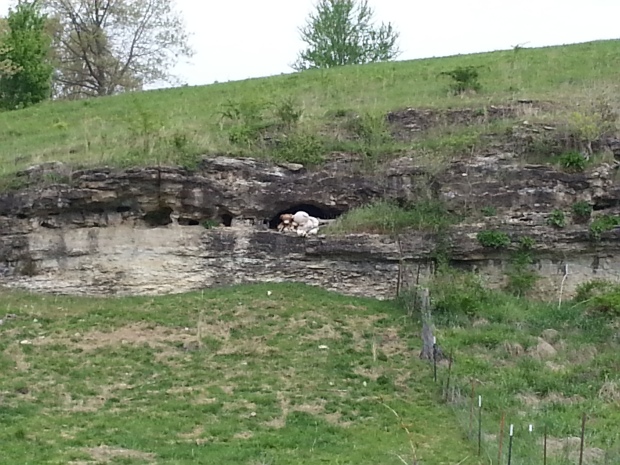 There’s bears in them hills

We came back into Hermann, checked in at the race tent, and rode over to 4th Street Pizza to refuel. 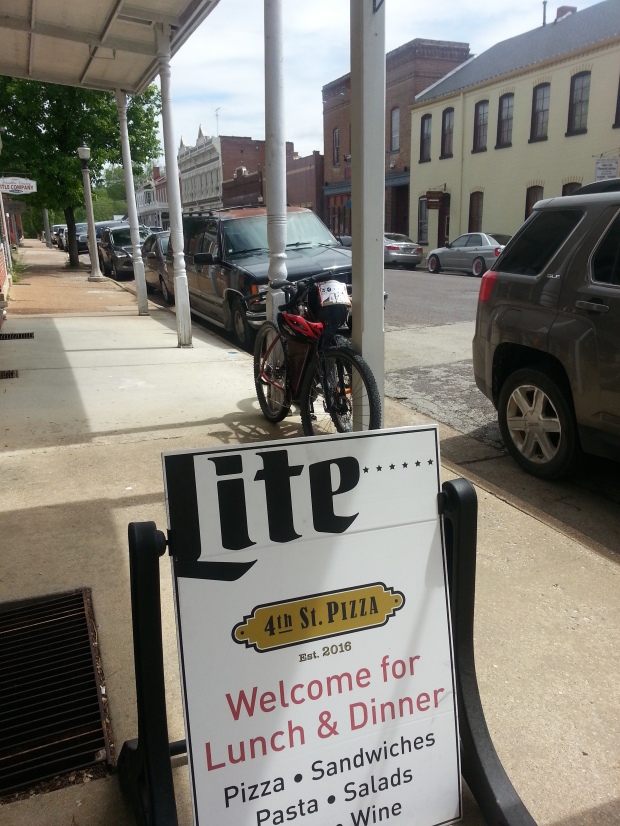 We ate entirely too much food, but the maple bacon on that pizza was asking for it.

I think the food tour of Hermann is more my speed.
We headed back to the campsite to nap off our food comas. I woke about an hour later to the sound of Chuck getting up and announcing he was headed out for the second lap of the race. I was lying in a cool breeze with a warm down blanket on me and wasn’t going anywhere.
Eventually I got up, made some coffee, and milled about some. I decided to explore Hermann a bit and spent some time rolling through the streets and checking out the little shops. Unfortunately, many of them closed earlier than I had expected, so my planned stop at the Chocolate store was not to happen. Probably for the best.
Once our friends had finished their 3rd loops of the race, we headed out to fulfill the Mexican food requirement of all our outings, which may in fact just be the side effect of a margarita requirement.

SuperKate joined our campsite for the evening and we enjoyed another alcohol stove campfire before heading off to our tents.

It was a fairly uneventful ride back to Columbia. My butt was sore and I was tired. I tried to minimize stops and just get back home.

Breakfast before leaving town. Surprisingly no one tried the Aporkalypse borrito. 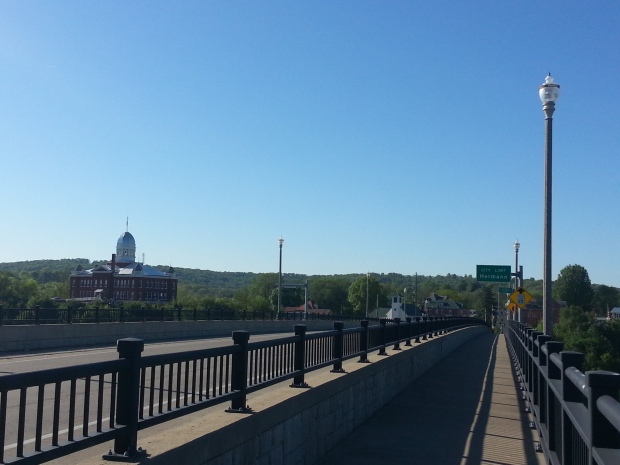 Looking back over at Hermann crossing the bridge 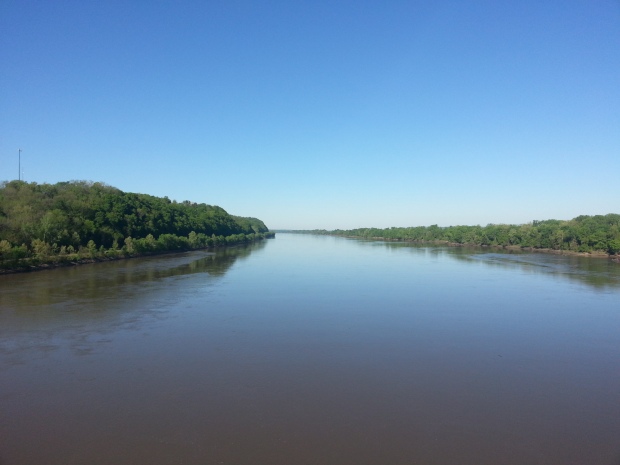 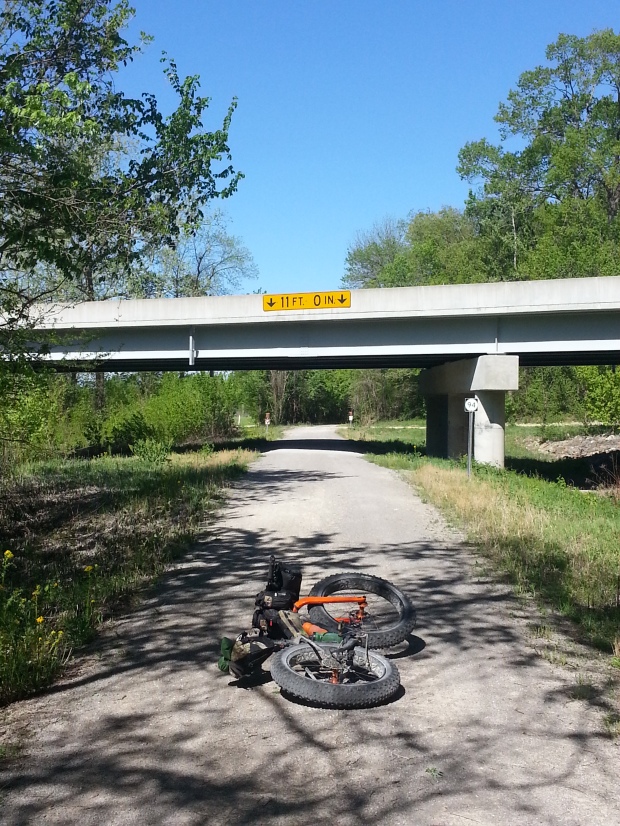 In the end it was a great weekend. I used everything that I packed and never felt like I was missing anything, which is about all you can ask for. It was a good chance to try out my bikepacking setup and get a good feel for the loaded fatbike, which is a tank, but smooth and stable. Unfortunately, this was the last year for the Tour of Hermann and I do slightly regret never getting to finish the full event. It was a great race and will be missed.

I may write up another post of my bike set-up, some of the key gear carried and how it’s worked so far. I’m always open to post suggestions and drop me a message if you ever want to ride some Mid-Mo gravel!

One thought on “Tour to the Tour of Hermann” 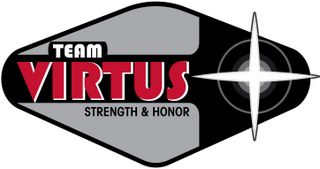